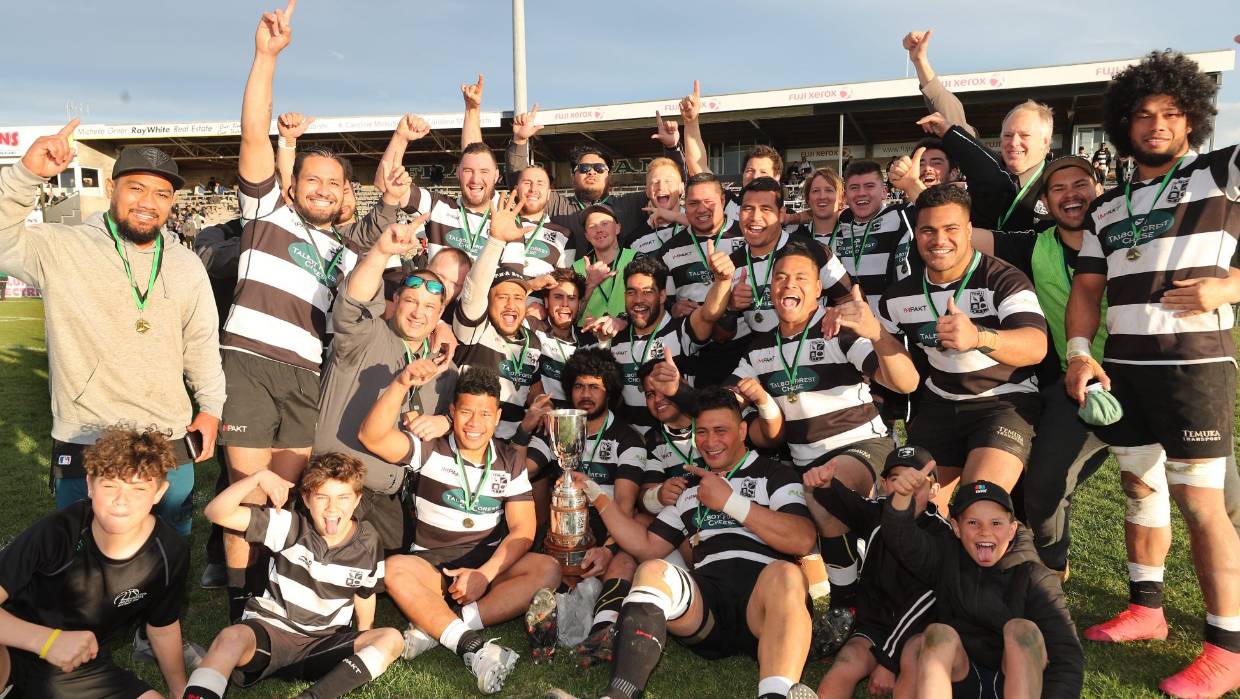 The Temuka senior rugby team celebrates winning the Hamersley Cup after a dramatic final against Waimate on Saturday.

Temuka are back-to-back Hamersley Cup champions after a dramatic last minute penalty snatched a 20-18 win over Waimate on Saturday.

Waimate looked to have stolen the South Canterbury senior club rugby title from the defending champions in the 78th minute when a brilliant converted try to halfback Theo Davidson put them ahead 18-17 only to concede a penalty in front of the posts a short time later.

Out in front of the posts at Alpine Energy Stadium it looked a simple kick but Mason’s curving shot only went over after hitting the upright to hand the Magpies a memorable victory.

The nail-biting finish was hard to predict after Temuka raced out to a 17-0 lead after 18 minutes.

Simote landed an early penalty and then blinside Tangi Savelio scored after a strong run.

Left-wing Kalavini Leatiga scored Temuka’s second try when he darted from halfback close to the line.

At that stage Waimate were missing too many first up tackles and a blow-out looked on.

However, Waimate rallied and replacement prop Paea I Whenua scored from close range after several phases close to the line and Davidson converted to make it 17-7.

Scrambling defence then saved Waimate several times in the final 10 minutes of the half, when they also lost lock and workhorse Henry Bryce to injury.

Waimate looked a different side in the second half, much more competitive, and were rewarded with two penalties to Davidson.

Midway through the half a charge down also saw Waimate almost score with centre Clarence Moli leading the chase to the loose ball but it beat everyone past the dead ball line.

Temuka opted not to kick for goal from a penalty and Davidson missed a two long range opportunity that added to the drama.

Waimate’s lineout then fell to pieces on three occasions in attacking positions and the opportunity to take the lead looked lost.

However, a brilliant set play from Davidson saw him run across the paddock while dummy runners held up the defence and Davidson scored what looked like the match winner, with four minutes left.

Failing to clear the ball down town from the kick off proved fatal and Temuka were awarded a last gasp penalty which Mason slotted for the victory.

Both sides had their moments and opportunities but it was far from a free-flowing game as both sides’ defence was excellent.

For Temuka blindside Savelio had a big game in a tough forward battle.

In the backs co-captain Ricki Neame impressed at send five with some strong carries and Mason looked dangerous at fullback when given space.

Midfielders Sione Faaoso and Moli were strong in defence, which frustrated the Magpies.

It was a great day for Temuka – they also took out the Glover Cup senior B title.

The highlight was two drop goals and a try to prop Nathan Robinson, while second five Tenari Saumani was sent off for a high tackle, and missed his opportunity to sit on the bench for the Hamersley Cup final.